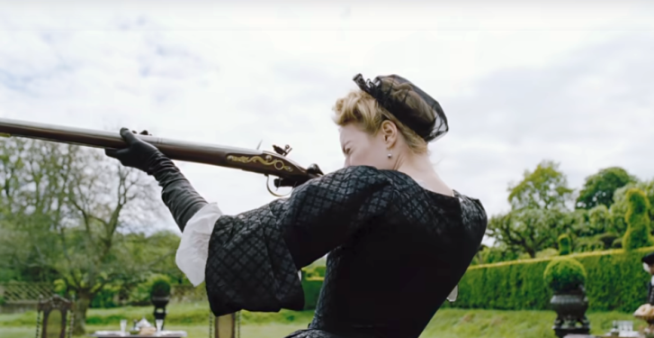 Emma Stone firing this musket in the film The Favourite

Introduced in 1775 the "Northwest gun" became instantly popular with American natives.  The British mass manufactured them to secure alliances with the various North American tribes from Canada to the border of Mexico.  From contemporary art of the late 18th and early 19th century, the longer 42 inch barrel "fusil" was the most common (barrel length varied between 41 and 42 inches).  Contrary to popular belief a fusil was not a shorter firearm but a lighter one.  Lewis and Clark in 1804 make reference to the natives they encountered as being armed with "fusees" or fusils. 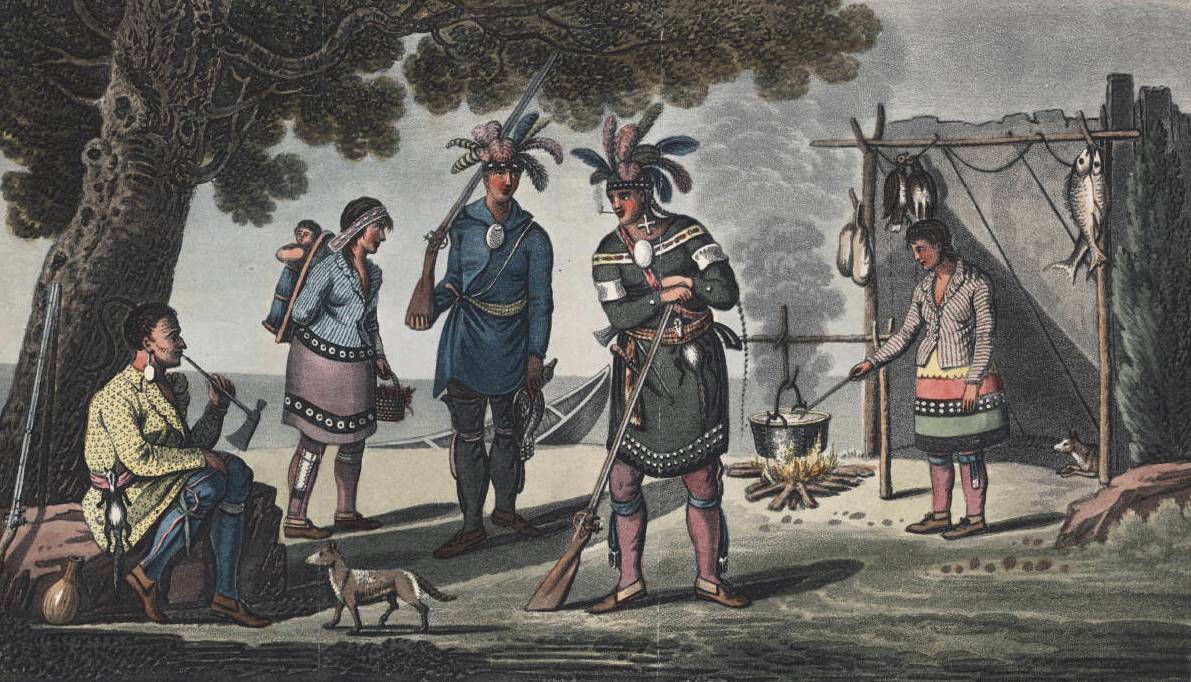 Woodland natives with this musket in 1807

With war on the horizon and American settlers pushing into the Ohio and onto the shores of Lake Michigan, the British reacted by arming the Shawnee and other tribes in the area with thousands of this musket in 1811.   By the time of the Battle of Tippecanoe at the end of 1811, the natives were completely supplied with this firearm.    When war broke out in 1812, tens of thousands of Indian trade muskets were transported and distributed to the natives by the British through the Indian department and the Northwest Fur Trade Company.  The fur trade gun offered here is marked like those during this period, complete with ordnance approval markings, along with the northwest company fox.

British Treasury records show the shipping of both the "common" longer barrelled trade guns and the shorter "Chief's" pattern gun (reproduction available here).   It is suspected that it was at this time that the shorter 36-inch barrel Northwest gun was introduced in more significant numbers.  The shorter chief's pattern owned by the Shawnee chief Tecumseh has survived and is in the Museum of the Fur Trade.

Many of the fur trade muskets were branded with a large I D and board arrow on the wrist of the stock to indicate that they came from the British Indian Department.     By the end of the War of 1812 this flintlock had became the standard for trade guns.  So much so the American Fur Trade Company had to copy the British pattern because the native tribes would accept no other model.   Fur traders, mountainmen, and other frontiersmen also adopted this firearm, since it was both tough, accurate and quick to load.  The mitten-friendly size of the steel trigger guard and the durable lock that did not freeze, made it ideal for hunting in the winter.  Unfortunately artists of the 19th century were more interested in documenting the native tribes than illustrating the trapper, and mountainman, so frontierman imagery is scarce.

The longer version remained popular throughout the first half of the 19th century.   It was not until the late 1830s that the shorter version started to really challenge the longer version's dominance.  While the percussion cap began to replace the flintlock, photographs of west coast natives as late as the 1870s, show the longer flintlock Northwest trade guns still in use.   Interestingly enough this model of trade musket was also distributed in Africa.

The following images show the longer version in use: 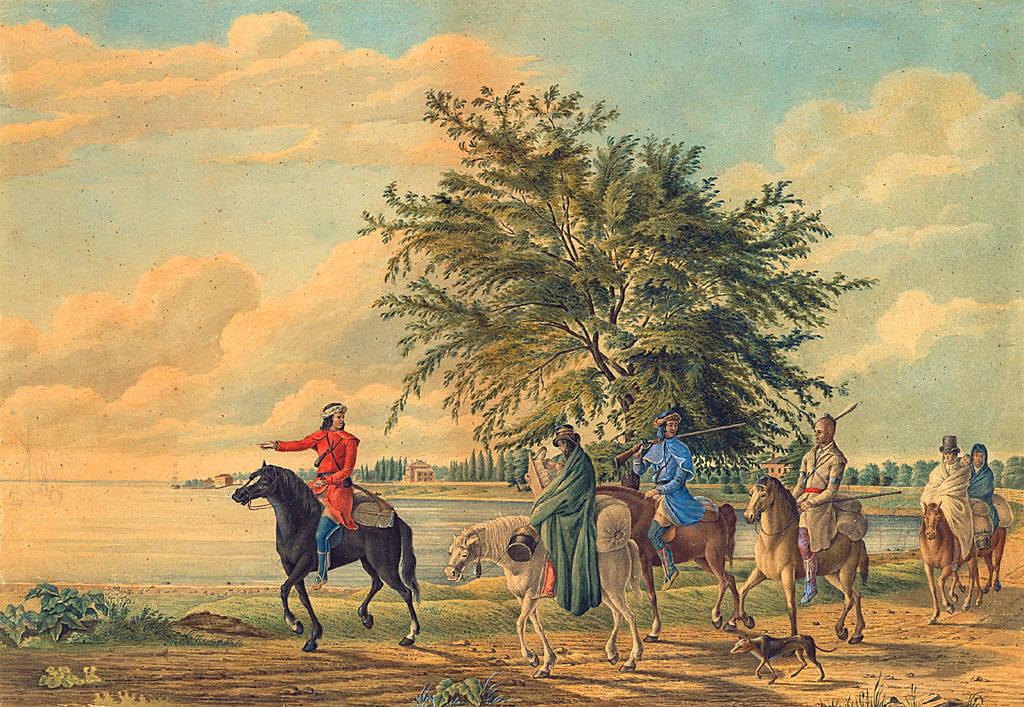 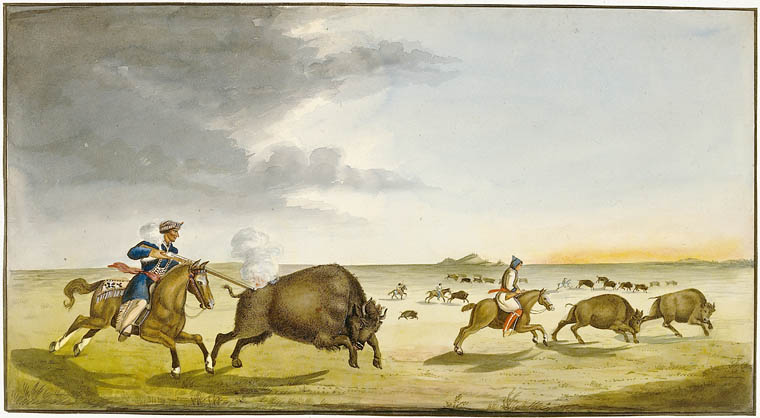 This smooth-bore musket has a 42-inch octagon-to-round barrel with a 20 gauge bore (.625 calibre).   Archaeological finds (example David Thompson's musket balls in 1811)  point to a .57 of .58 ball being most commonly used.  Overall length of reproduction is 58 inches.

Because the browning varied from original to original, and is dictated by personal preference, we have left it in the bright steel.   The British made trade guns manufactured before 1816 were most likely browned naturally and were not blued.   Read more about browning of arms by the British here.  Of course the lock screws go through the iconic brass coiled serpent / dragon patterned plate.  The stock butt is squared like the originals.  This style of butt was popular with sea service muskets and was presumably considered more durable.

As the photographs attest, this replica is quite well assembled with a case hardened frizzen cover (hammer) producing good sparks. The seamless tempered barrels are made of polished high-carbon steel (type:BS970 no.080M40- auto industry foundry) and the breeches are tight. We use a industrial case-hardening factory process that makes sparking both more reliable and longer lasting. Presently no other musket provider uses this technique.

As with all our other flintlocks, the vent is not drilled (read details below) so we can ship easily to your door throughout North America and to Europe and the UK. Aside from that they are exactly like the originals. A fine addition to any collection.


- Money-back Guarantee - Shipped to your Door -

Shipping costs at bottom of our main Muskets and Pistols page