French Account of the Battle of Lake George in 1755 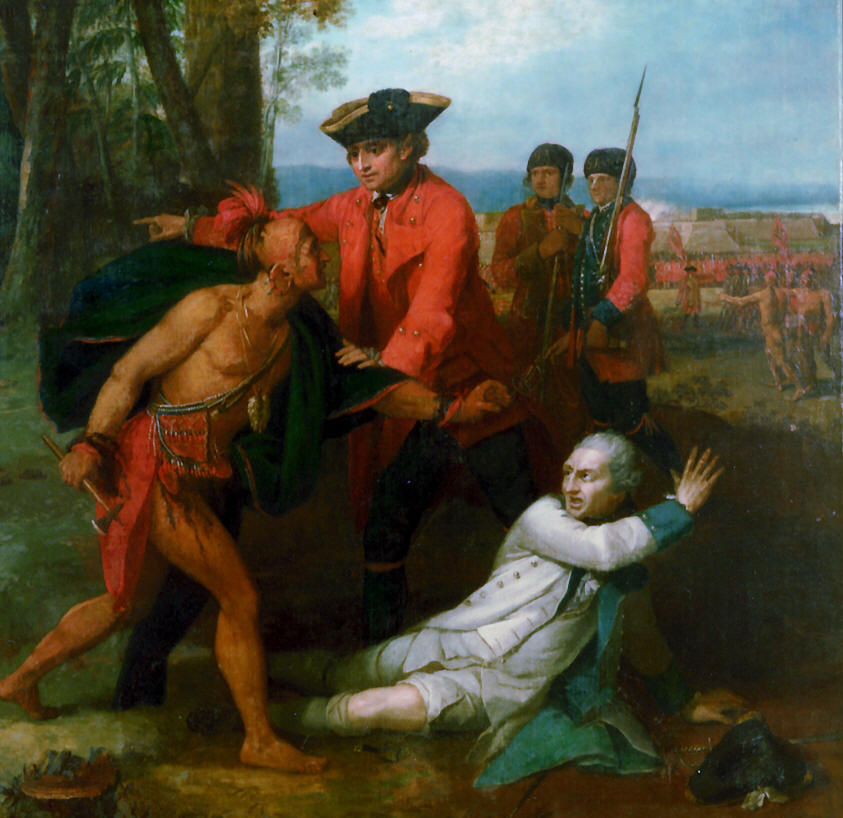 Born in Saxony in 1701, Baron de Dieskau was the commander of the French regulars in New France at the unofficial opening of the French and Indian War.   His role was relegated to the tactical conducting of the war, while Governor General Rigaud de Vaudreuil handled the strategy of protecting the colony.

Moving a small force of regulars, Canadian militia and Native allies under the Mohawk chief Theyanoguin, Dieskau attempted to take the offensive on the traditional Lake Champlain invasion route.  However the Baron did not comprehend how war was fought in the woods of North America and was surprised when native allies refused to attack Fort Edward on the Hudson River in the colony of New York.  Falling back, Dieskau then laid an ambush for Colonial William Johnson's advancing American Militia and Iroquois.  However on September 8 the trap was sprung prematurely - Dieskau blames the Mohawks even though it resulted in the death of Theyanoguin.  The American militia detachment escaped back to Johnson's fortified camp on Lake George.

As the Canadians and natives were spent from fighting in the initial engagement, Dieskau only had 200 French regulars to pursue the fleeing enemy.  Confronted by Johnson's fortified position, and overconfident in the ability of his regulars, Dieskau assaulted the camp.  The assault failed to breach the American positions, and French fell back under cover of the Mohawk allies and Canadians who had since joined the battle.  While it was a tactical standoff, American colonial newspapers trumpeted it as a great victory.

During the engagement Dieskau was wounded several times and was made prisoner, and spent the rest of the war in Bath, England recuperating from his injuries.  Also in Bath at the end of the war was the Pennsylvanian-born artist Benjamin West. It is likely West meet Dieskau and heard the story of how he was wounded in at the Battle of Lake George.   In his painting above West illustrates Dieskau's wounded knee, but politely covers up a gunshot to the groin with the French officer's unbuttoned waistcoat.  Such details West would not have been aware of if he hadn't heard the specifics from Dieskau or an acquaintance.  Indeed Dieskau was quite vocal about the details of his wounds while in Bath on parole, and lobbied the French Government to send him funds as compensation of his sacrifice.

Below is Dieskau's original report of his actions prior to and during the battle.

I have had the honour to report to you everything of interest to the service, up to my departure for Fort St. Frederic.

On the very vague intelligence of the designs of the English in that quarter, I proceeded thither with 3000 men, whereof 700 were Regulars, 1600 Canadians, and 700 Indians. I arrived at Fort St. Frederic on the 16th and 17th of August; a portion of the troops had proceeded me; the remainder joined me there without delay.

Before quitting Montreal, I had already various reasons for suspecting the fidelity of the domiciliated Iroquois, both of the Sault St. Louis and that of the Lake of the Two Mountains, whose number exceeded 300, composing half of the Indians that had been given to me. I represented it repeatedly to M. de Vaudreuil, who would never admit it, but scarcely had I arrived at Fort St. Frederic, than I had occasion to furnish him still stronger proofs thereof.

For more than 15 days that I was encamped under that fort, I encountered nothing but difficulties from the Indians; those who were good, were spoiled by the Iroquois. Never was I able to obtain from them a faithful scout; at one time they refused to make any; at another time, seeming to obey me, they set forth, but when a few leagues from the camp, they sent back the Frenchmen I had associated with them, and used to return within a few days without bringing me any intelligence. Such has been the conduct of the Indians, caused by the Iroquois. My letters from Fort Saint Frederic to M. de Vaudreuil and M. Bigot, sufficiently develop the particulars of their mischievous intrigues.

At length, on the 27th of August, a Canadian named Boileau, returned from a scout and informed me that about 3000 English were encamped at Lidius' house, where they were constructing a fort that was already pretty well advanced. I immediately resolved to go forward and to post myself in an advantageous place, either to wait for the enemy, should he advance, or to anticipate him myself, by going in quest of him. On arriving at this post, some Abenakis who had been on the scout, unknown to the Iroquois, brought me in an English prisoner, who told me that the body of the English army had moved from Lidius', and that only 500 remained there to finish the fort, but that they were expecting 2400 men, who were to march to the head of Lake St. Sacrament for the purpose of Building a fort there also.

On this intelligence I determined to leave the main body of the army where I was, and to take with me a picked force march rapidly and surprise Fort Lidius, and capture the 500 men encamped without its walls. My detachment was composed of 600 Indians, 600 Canadians and 200 Regulars belonging to La Reine and Languedoc Regiments. It was four days' journey by water and across the woods to Lidius'. All exhibited an ardour which guaranteed success, but the fourth day, which ought to be favourable to the King's arms, was the commencement of our misfortune. The Iroquois refused point blank to march to attack the fort, or rather the camp of the 500 English; but, perceiving that I was resolved to dispense with them, and that the other Indians were disposed to follow me, they sent excuses and immediately set forth to lead the van, as if to make a parade of their zeal.

Mine was a combined movement. I was to arrive at nightfall at that fort and rush to the attack; but the Iroquois, who took the lead on the march, under the pretence of zeal, caused a wrong direction to be taken; and when I was informed of the circumstance, it was no longer time to apply a remedy, so that at nightfall I was yet a league from that fort on the road leading from it to Lake St. Sacrament.

A courier that was killed, and whose despatch was brought to me, and some prisoners that were brought in, gave me the intelligence that about 3000 English were encamped near there, and that they had but a confused knowledge of the strength of my forces. I immediately gave the Indians the choice of proceeding next day to attack either the fort or this army. The vote of the Iroquois which prevailed, caused the latter course to be adopted. On the following day, the 8th of September, I commenced my march. About 10 of the clock, after having proceeded 5 leagues, the scouts reported to me that they had seen a large body of troops on their way to the fort, which news was confirmed by a prisoner, taken at the time. They consisted of one thousand men or more, that had left the camp to reinforce the fort. I immediately made my arrangements, ordered the Indians to throw themselves into the woods, to allow the enemy to pass, so as to attack them in the rear, whilst the Canadians took them on the flank, and I should wait for them in front with the regular troops.

This was the moment of treachery. The Iroquois, who were on the left, showed themselves before the time and did not fire. The Abenakis, who occupied the right, seeing themselves discovered, alone with a few Canadians attacked the enemy in front and put them to flight. I immediately prepared to join them, in order to accompany the fugitives into their camp, though still more than a league off.

Meanwhile, the Iroquois collected on a hill, unwilling to advance. Some of them even wanted to force the Abenakis to release three Mohawks whom they had captured at the first encounter. I am ignorant of the result of that quarrel; but the Abenakis, seeing the Iroquois immovable, halted also, and the Canadians, seeing the retreat of the one and the other, were thereby intimidated.

As I was near the enemy's camp, and in front of the cannon, I marched forward with 200 Regulars to capture it, expecting that the Canadians would not abandon me, and that the Indians would perhaps return; but in vain. The Regulars received the whole of the enemy's fire and perished there almost to a man. I was knocked down by three shots, none of which were mortal, but I received a 4th that passed from one hip to the other, perforating the bladder.

I know not at present what will be my fate; from Monsieur Johnson, [Colonel] of the English army, I am receiving all the attention possible to be expected from a brave man, full of honour and feeling. Sieur de Bernier, my Aide de Camp, is a prisoner with me; he has been fortunate enough to receive only a slight bruise from a splinter. I know not of any other officer taken. Should the nature of my wounds destroy the hope of returning to Europe, and should Sieur Bernier go there, he will be able to give you, my Lord, the fullest details of this affair, and of everything that my situation prevents me explaining to you.

I beg of you, my Lord, to have regard for his zeal for the service, and for his attachment to me.

I have the honor to be respectfully, My Lord,
Your most humble and Most obedient servant,
Baron de Dieskau."